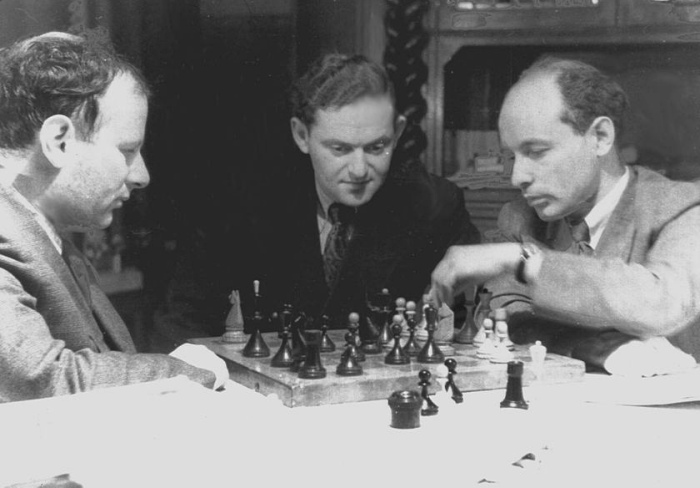 The first-ever 1950 Candidates Tournament in Budapest, Hungary, became a turning point in the history of chess. Before this event, there was no system in place to determine a challenger in a World Championship match. Any potential challenger had to negotiate with the champion himself, secure funding and arrange a match. After Alekhine’s death in 1946, followed by Botvinnik’s victory in the 1948 World Championship Tournament, FIDE organized the first World Championship cycle that included Zonal, Interzonal and Candidates tournaments.

Five qualifiers of the Interzonal tournament (Saltsjobaden, 1948) were supposed to join four participants of the 1948 World Championship tournament (Reshevsky, Keres, Smyslov, and Euwe) plus Robin Fine in a double round-robin competition. Unfortunately, Reshevsky and Fine opted not to play (according to another version the U.S. State Department barred them from traveling to Hungary due to Cold War), while Euwe did not get a leave from the university. Subsequently, FIDE decided to replace them with players who finished 6th-9th in the Interzonal tournament: Miguel Najdorf, Gideon Stahlberg, Salo Flohr and Igor Bondarevsky (the latter withdrew). 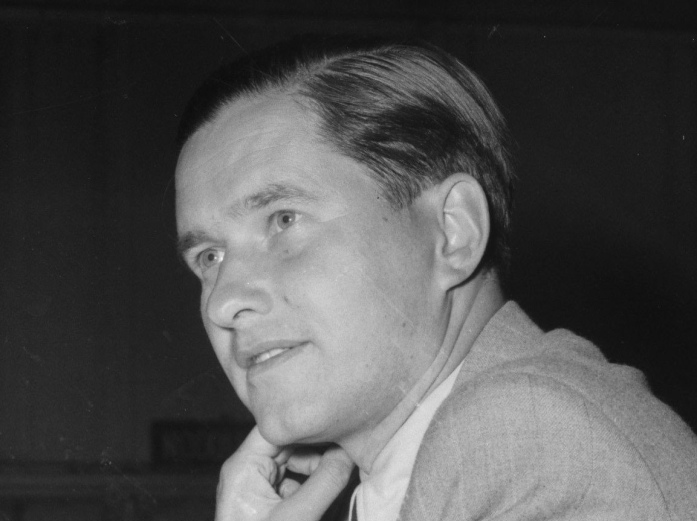 Vassily Smyslov, Paul Keres and the winner of the first Interzonal tournament David Bronstein entered the event as the main favorites but it was Isaac Boleslavsky who held the stage for the most of the event. Playing the tournament of his life, he demonstrated very solid opening preparation, deep strategic concepts, tenacity in defense and error-free calculation. Boleslvasky played one of his finest games in Round 6 in which he routed Smyslov in just 22 moves and joined the leaders. 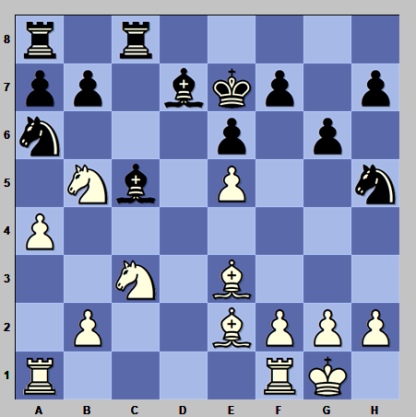 Halfway through Boleslavsky was leading the field with an excellent score +3, followed by Keres (+2) and Bronstein (+1). The Estonian maestro won probably the most spectacular game of the event, which became his trademark. 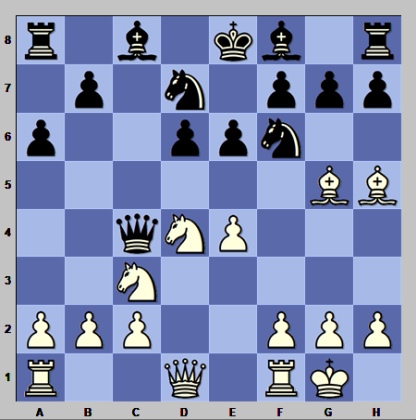 In the second part of the event, Boleslavsky scored three more victories (the one over Szabo is particularly impressive) and pulled away. At some point, many thought that the 30-year old Soviet GM had punched his ticket to the World Championship match with Botvinnik. Indeed, after Round 16 Isaac was a full point ahead of Bronstein – the only player who had a theoretical chance to catch up with the leader. 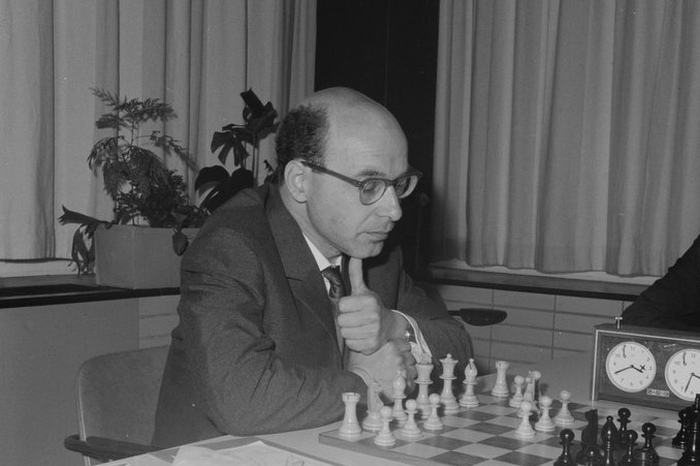 In the last two rounds, Boleslavsky made two quick draws, hoping that his old friend and compatriot would not be able to win both games, but that is exactly what happened! First David outsmarted Stahlberg with Black in a very complicated game, then in the final round facing Keres with White, he took a lot of risks but got to opponent’s king and so tied for the first place. Bronstein’s spurt in the second part of the tournament staggers imagination – the GM from Moscow scored 7 out of 9! The following fragment illustrates his high-voltage, aggressive style: 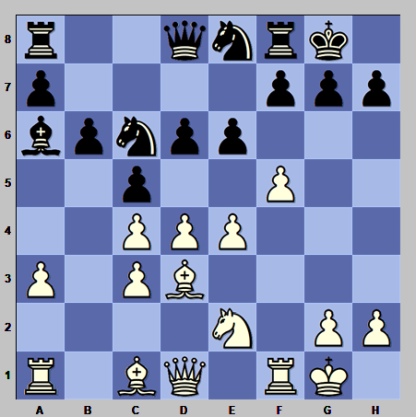 The event in Budapest became the only Candidates Tournament to end in a tie for the first place (in London 2013 Magnus Carlsen and Vladimir Kramnik scored equal number of points but the former became the winner thanks to better tiebreaks). Bronstein and Boleslavsky had to play a playoff match, which was held in the summer of 1950 in Moscow. It ended in another tie, but Bronstein won the first decisive game and became the official challenger.

One of the event favorites Vassily Smyslov was hovering around 50% almost all the way but his fortune changed in Round 16. After obtaining an overwhelming position, his opponent, Alexander Kotov went for a flashy combo but missed an important subtlety. Arguably, this game can be called a miscalculation of the tournament. 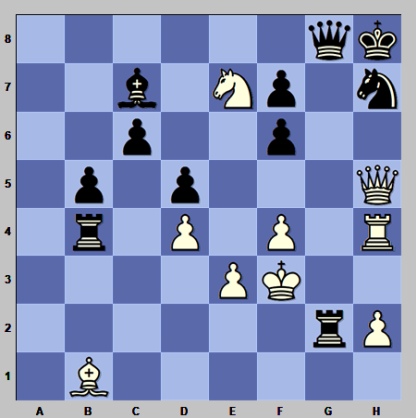 Black looks hopeless. That’s what Kotov, Najdorf (who praised him for the played sequence) and even Smyslov himself initially thought. It turns out that White’s idea is refuted by 42…Rf2+! with an immediate win. Smyslov found this move and scored a full point.

Since top-five finishers of the event were guaranteed spots in the  Candidates 1953, this vexing defeat cost Kotov dearly – he ended up in sixth place, just a half-point behind Najdorf. Later Kotov did qualify for the Candidates 1953 after turning in the most impressive performance of his chess career at the Interzonal 1952 held in Stockholm.

In two final rounds, Smyslov made two draws and finished clear third a half-point ahead of Keres, who lost steam in the second part of the event (4th place). Other players had their share of bright moments in Budapest but did not participate in the race for the top spot. 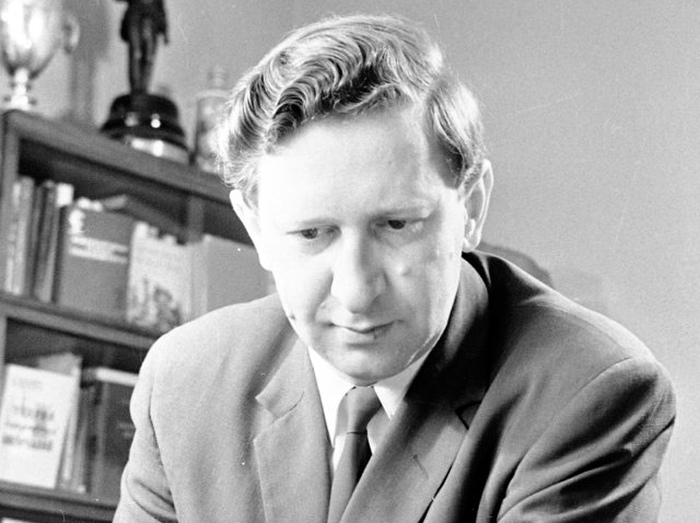 Although the 1950 Candidates in Budapest was not the most spectacular event it set a trend and paved the way for the historical tournaments in Zurich (1953), Amsterdam (1956), Yugoslavia (1959) and Curacao (1962). It is symbolic that after many years of play-off matches and knockout tournaments, FIDE eventually returned to this good old round-robin format so popular among chess players and spectators all around the world.